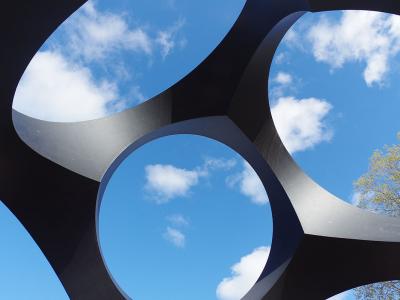 An accidental theme is found in five sculptures on the Western campus: they invite the viewer to look—away from the sculptures—at something beyond them. The five sculptures—Bayview Station by George Trakas, Skyviewing Sculpture by Isamu Noguchi, Stadium Piece by Bruce Nauman, Stone Enclosure: Rock Rings by Nancy Holt and Log Ramps by Lloyd Hamrol—function as observatories and stadiums, pointing the viewer towards the bay, the sky, the Pole Star or, in the case of Stadium Piece and Log Ramps, to the passersby. The theme is accidental because the sculptures were not selected for the collection based on these characteristics. They were created over a period of thirty years (1969-1999) specifically for the Western campus and they developed directly out of each artist’s personal art practice. Yet, the theme is found in the five sculptures and the question arises: what accounts for its presence? This exhibition responds to this question and searches for indications in works on paper from the same general period of American art.

To point presupposes a direct connection between the one who points and what is pointed at. You can experience such connection by entering any of the five sculptures and point to what you see. But how can a drawing be said to point? How can it create a direct contact with something beyond its boundaries?

The radical call for specificity that gave birth to environmental sculpture was not limited to three-dimensional art. It motivated artists across mediums to reject mimetic and metaphoric relations in favor of actual contact. The works in the gallery show various approaches to creating such contact, either through (non-expressive) acknowledgement of the artists or the viewers’ presence, or through actions that connect the works to occurrences outside their frames. For contrast, de Maria’s series of pure polygons is included for its rejection of all such efforts in favor of self-containment and nonreferentiality.

“Pointing” is the second in a series of summer exhibitions that place sculptures on Western’s campus in a wider context provided by the collection American Works on Paper (1945-1975). This selection of 97 works by 48 American artists was assembled in 1975 and 1976 by the collector Virginia Wright and the legendary art dealer Richard Bellamy. Ms. Wright established the Washington Art Consortium of seven museums in 1975 to own, maintain and exhibit the collection. It was given to the Western Washington University in 2017, when the Consortium disbanded. A visionary art patron, Wright has given Western many of the sculptures on campus, including Nauman’s Stadium Piece, and supported the acquisition of others. In addition to works by the now historically important artists who make up the Works on Paper collection, the exhibition also includes a new knit-felted wool drawing by an artist emerging on the national scene, Matt Browning.

For the side exhibition of projections, photographs have been contributed by Paul Brower (Skyviewing Sculpture) and the artist team of Barbara Miller and Dimitri Katsaros (Stone Enclosure: Rock Rings).