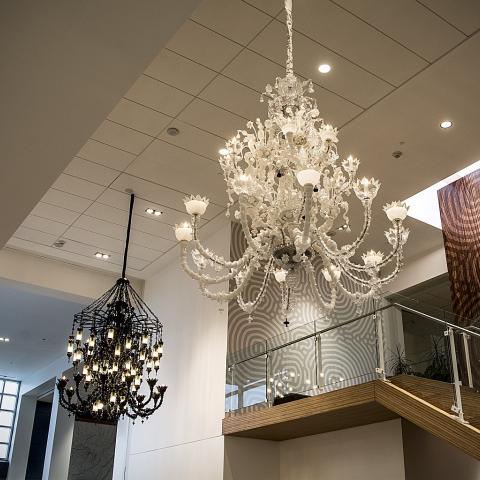 Fred Wilson is renowned for multi-disciplinary artworks that challenge assumptions of history, culture, and race. In his two large chandelier sculptures in the entrance to the Viking Union, Wilson continues to expose the undercurrents of historical discourse. The chandeliers are, as he puts it, “complex sculptures of meaning and memory.” They are lavish symbols of wealth and privilege, modeled on traditional Venetian and Ottoman chandelier design. Wilson explains, “I wanted the chandeliers to embody the complex relationship between the Venetian Empire [in Italy] and the Ottoman Empire [in Eastern Europe including Turkey] and the Africans swept up into both their histories. These two works, while very different, are tied by their connection to history, to poetry, to identity, to beauty.”

The two chandeliers are the products of Venetian craftsmanship, made of Murano glass in the traditional Rezzonico style. Wilson's use of black glass is the first in the history of Venetian glassmaking. The titles come from literature. “The Way the Moon’s in Love with the Dark” is a line from a poem by Alexander Pushkin, whose great grandfather was an African born general in the Russian Army and a member of the Imperial Household in Moscow. The words “A Moth of Peace” are spoken by Othello in Shakespeare's play, as Othello tries to dissuades Desdemona from going with him to the war zone in Cyprus.

Acquired in memory of Virginia “Jinny” Wright (1929-2020), the chandeliers are the latest addition to Western’s sculpture collection. Jinny commissioned artists to create artworks for specific sites on campus in a three-decade long collaboration with Western. Funded in part by her children (Bing, Charles, Merrill, and Robin Wright), the chandeliers are part of this legacy. Additional funding was provided by the Washington State Arts Commission’s Art in Public Places program.

Wilson has left his mark on the American and international art world. Beginning with the groundbreaking and critically acclaimed exhibition Mining the Museum (1992-93), Wilson has challenged conventions of display by reframing objects and cultural symbols. In the process, he has altered traditional interpretations of history and brought systemic racism, exploitation, and imperialism to light.

Wilson’s art can be found in many collections, including the Museum of Modern Art (MOMA) and the Whitney Museum of American Art in New York City, the Tate Modern in London, England, and more. His many accolades include the prestigious John D. and Catherine T. MacArthur Foundation’s “Genius” Grant (1999); and the Ford Foundation's, The Art of Change Award (2017-18). Wilson represented the United States at the Cairo Biennale in 1992 and at the 50th Venice Biennale in 2003. He did a major installation titled Afro Kismet at the Pera Museum in Istanbul, Turkey, for the 2017Istanbul Biennial.