The Western Gallery is proud to present Finnbogi Pétursson’s sound-modulated water installation Infra-Supra during the Winter Quarter. Pétursson is known for intricate and subtle sound sculptures that one writer has described as “part physics and part poetics.” They rely on complex sound wave science and high tech equipment to deliver deceptively simple but mesmerizing visual experience.

In Infra-Supra, Pétursson uses sound waves to create patterns of intersecting ripples on the surface of a large pool of water. With the aid of strategically placed lighting, the pulsing wave patterns are projected onto a wall in the form of animated dance of shadows. Pétursson refers to his poetic visualizations of sound as “drawings,” emphasizing the otherwise undetectable patterns of lines that his installations render observable.

Since completing his education at the Jan van Eyck Akademie in Maastricht, the Netherland in 1985, Pétursson has had one-person exhibitions in Austria, China, Germany, Iceland, Ireland, Italy, Netherlands, Poland, Spain, Sweden, and the United States. He represented Iceland at the 2001 Venice Biennale and was recognized with a prestigious Carnegie Art Award in 2006. His work has also been included in the 4th International Istanbul Biennial, the 14th Marrakech Biennale and other major international group exhibitions. Infra-Supra is Pétursson’s first exhibition in the northwest United States. 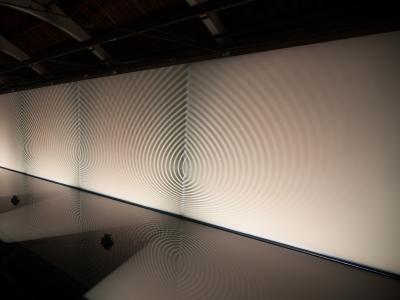