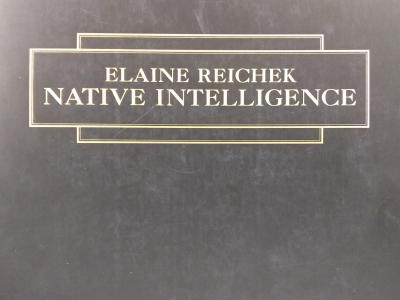 In her work, Elaine Reichek (New York based artist) "decolonizes" colonized peoples. Other beginning with ethnographic photographs common to the early 20th century - the sort of images that have often been used to form perceptions of "other" peoples Reichek constructs an environment that is at once real and unreal. Curiously, the images that she uses are not products of the subject’s culture but rather products of her own culture as it observes the subject. In an installation of large scale photo collages and photo-embroidery works the Native American is portrayed in typical Reichek fashion. The source photographs remind us of Catlin's turn-of­ century survey work. Nowhere do we find images reminiscent of Remington’s renderings of the noble savage or colonial representations of Native America. What we do find is truth disguised in a veil of manipulated images which Reichek cleverly and sequentially begins to strip away. Through her painted "re-decoration" of the source photographs, the artist makes clear her "doctoring" of reality and induces us to reconsider the veracity of all other such documentations of so-called primitive peoples. Further, in the use of knitting and hand-embroidery, Reichek forces us to recall Native artifacts and the importance of handicraft in Native American culture as well as demolishes the hierarchy of fine art over native crafts.