Dance as a Weapon, Art as Environment: An Interdisciplinary Exhibition 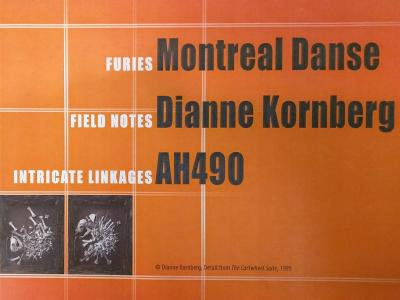 The Montreal Danse performances takes place in the Western Gallery featuring Dianne Kornberg's Field Notes: Photographs from the Biology Lab, 1992- 2007. Kornberg makes vintage toned gelatin silver photographs and pigment inkjet prints of biological and botanical specimens which intrigue and repulse the viewer. From imperfectly developed forms to marine life to the skeletal remains of animal and insects in boxes, she provides the evidence of life eroded by use and time. Montreal Danse's "pulsing" range [1-24] of passions are played against the structural complexity of the photographed specimens resonating with order and chaos, control and lack of control. _x000d_ _x000d_ Visual Art Students Response to Dance and Kornberg's Photographs: In a small gallery within the Western Gallery, students in a seminar taught by Julia Sapin, Art Historian, arrange an exhibition in response to the themes of Furies... and Kornberg's photographs. The students select works from the Al and Vera Leese Collection (Gift of Marian Boylan, Bellingham) which amplify various sub-themes, such as natural and artistic processes; reality and illusion; the subject of authority, scientific evidence and artistic invention; social constructs; art and political power. The "response exhibition" will be on view during the Montreal Danse performances.