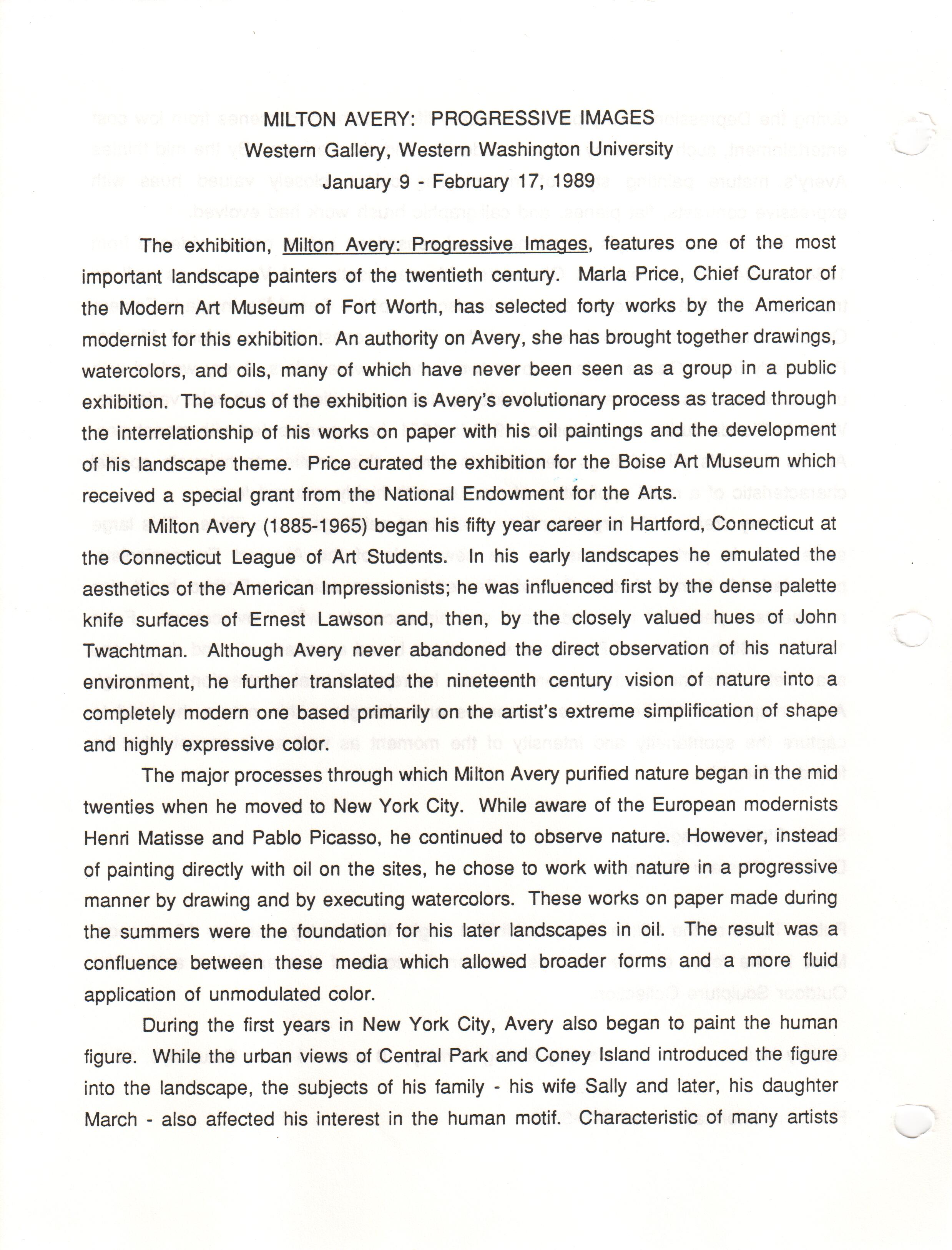 The exhibition, Milton Avery: Progressive Images, features one of the most important landscape painters of the twentieth century. Marla Price, Chief Curator of the Modern Art Museum of Fort Worth, has selected forty works by the American modernist for this exhibition. An authority on Avery, she has brought together drawings, watercolors, and oils, many of which have never been seen as a group in a public exhibition. The focus of the exhibition is Avery's evolutionary process as traced through the interrelationship of his works on paper with his oil paintings and the development of his landscape theme. Price curated the exhibition for the Boise Art Museum which received a special grant from the National Endowment for the Arts.

Milton Avery (1885-1965) began his fifty year career in Hartford, Connecticut at the Connecticut League of Art Students. In his early landscapes he emulated the aesthetics of the American Impressionists; he was influenced first by the dense palette knife surfaces of Ernest Lawson and, then, by the closely valued hues of John Twachtman. Although Avery never abandoned the direct observation of his natural environment, he further translated the nineteenth century vision of nature into a completely modern one based primarily on the artist's extreme simplification of shape and highly expressive color.

The major processes through which Milton Avery purified nature began in the mid twenties when he moved to New York City. While aware of the European modernists Henri Matisse and Pablo Picasso, he continued to observe nature. However, instead of painting directly with oil on the sites, he chose to work with nature in a progressive manner by drawing and by executing watercolors. These works on paper made during the summers were the foundation for his later landscapes in oil. The result was a confluence between these media which allowed broader forms and a more fluid application of unmodulated color.

During the first years in New York City, Avery also began to paint the human figure. While the urban views of Central Park and Coney Island introduced the figure into the landscape, the subjects of his family - his wife Sally and later, his daughter March - also affected his interest in the human motif. Characteristic of many artists during the Depression, Avery painted his daily life at home and scenes from low cost entertainment, such as Coney island, vaudeville, and sport events. By the mid thirties Avery's mature painting style of intermingling colors, closely valued hues with expressive contrasts, flat planes, and calligraphic brush work had evolved.

The range of Avery's experiences and sensations before nature widened from 1938 to 1948 as he revisited Gloucester, Massachusetts and Vermont as well as traveled for the first time to the dramatic landscapes of the Gaspe Peninsula in Eastern Quebec, the Canadian Northwest, and the Oregon coast and to colorful Mexico. Particularly in the Gaspe series of over two hundred watercolors, Avery worked with unusual viewpoints which resulted in bolder spatial compositions of rich color variations. While in Florida during the winters of 1948 to 1951, he experimented with monotypes. At this time his oil paintings demonstrate further this printing technique's special characteristic of a rapid application of medium with highly reduced form.

Avery created his largest and most abstract paintings in the fifties. This large scale was, in part, a response to the new scale of the Abstract Expressionists, particularly his friends, Adolph Gottlieb, Barnett Newman, and Mark Rothko, but it also represents a period of renewed health and his encounter with Provincetown. From 1957 to 1960 he captured Provincetown's unique broad expanses of sand dunes and sea. Yet, unlike the Abstract Expressionists, he rejected total abstraction. Although Avery responded to the timeless essences and changes within nature, he tried to capture the spontaneity and intensity of the moment as well as to accept what he found before him. Sarah Clark-Langager Director, Western Gallery Public Tours of the Milton Avery exhibition begin Wednesday, January 18 at noon. Meet in the foyer on Wednesdays at noon for tours of this exhibition and/or the Outdoor Sculpture Collection. Gallery Hours: Monday through Friday, 10 a.m. - 4 p.m.; Saturdays, 12 to 4 p.m. For more information, call 676-3963.