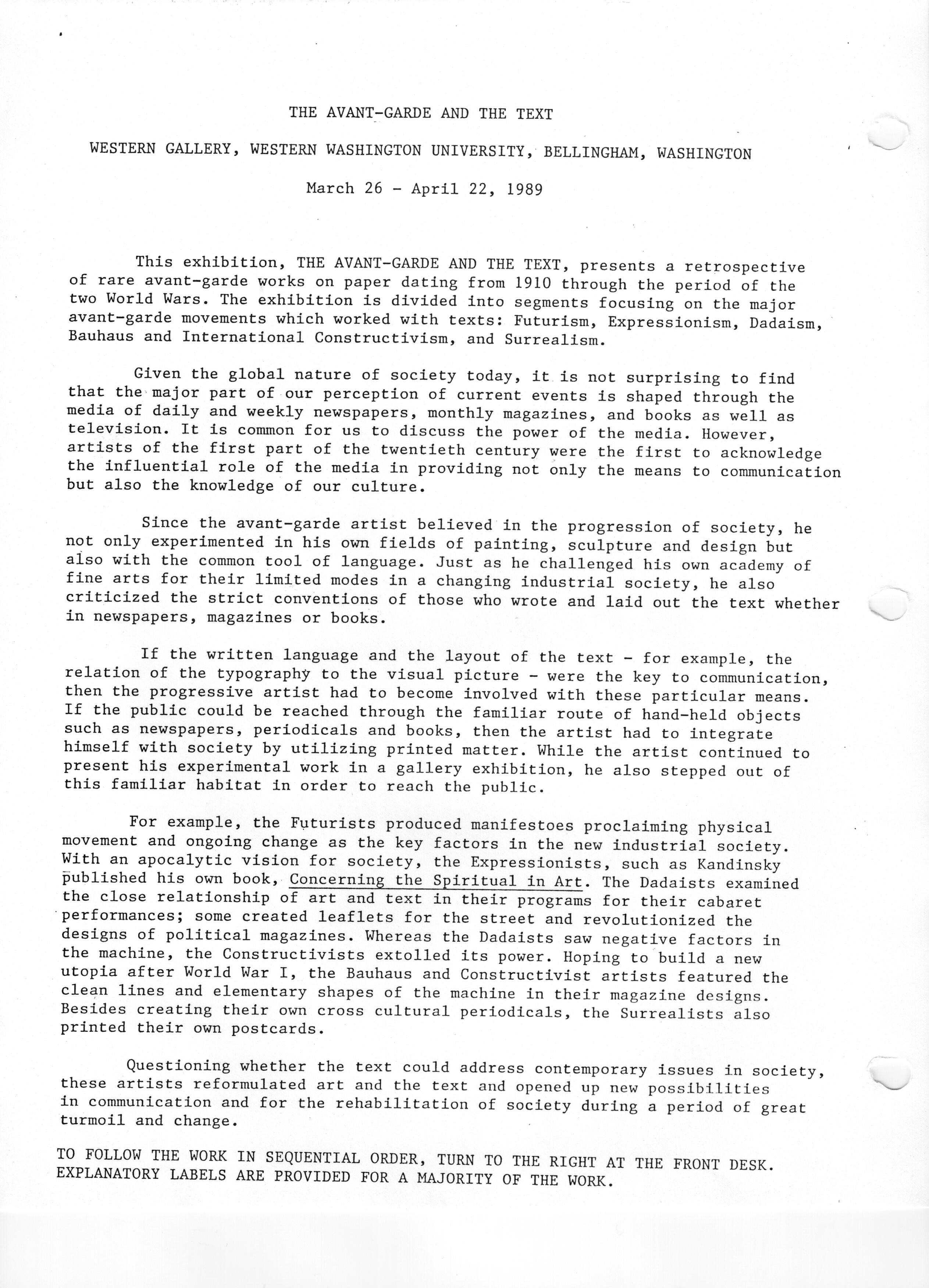 The Avant-Garde and the Text

This exhibition, THE AVANT-GARDE AND THE TEXT, presents a retrospective of rare avant-garde works on paper dating from 1910 through the period of the two World Wars. The exhibition is divided into segments focusing on the major avant-garde movements which worked with texts: Futurism, Expressionism, Dadaism, Bauhaus and International Constructivism, and Surrealism.

Given the global nature of society today, it is not surprising to find that the major part of our perception of current events is shaped through the media of daily and weekly newspapers, monthly magazines, and books as well as television. It is common for us to discuss the power of the media. However, artists of the first part of the twentieth century were the first to acknowledge the influential role of the media in providing not only the means to communication but also the knowledge of our culture.

Since the avant-garde artist believed in the progression of society, he not only experimented in his own fields of painting, sculpture and design but also with the common tool of language. Just as he challenged his own academy of fine arts for their limited modes in a changing industrial society, he also criticized the strict conventions of those who wrote and laid out the text whether in newspapers, magazines or books.

If the written language and the layout of the text - for example, the relation of the typography to the visual picture - were the key to communication, then the progressive artist had to become involved with these particular means. If the public could be reached through the familiar route of hand-held objects such as newspapers, periodicals and books, then the artist had to integrate himself with society by utilizing printed matter. While the artist continued to present his experimental work in a gallery exhibition, he also stepped out of this familiar habitat in order to reach the public.

For example, the Futurists produced manifestoes proclaiming physical movement and ongoing change as the key factors in the new industrial society. With an apocalyptic vision for society, the Expressionists, such as Kandinsky published his own book, Concerning the Spiritual in Art. The Dadaists examined the close relationship of art and text in their programs for their cabaret performances; some created leaflets for the street and revolutionized the designs of political magazines. Whereas the Dadaists saw negative factors in the machine, the Constructivists extolled its power. Hoping to build a new utopia after World War I, the Bauhaus and Constructivist artists featured the clean lines and elementary shapes of the machine in their magazine designs. Besides creating their own cross cultural periodicals, the Surrealists also printed their own postcards.

Questioning whether the text could address contemporary issues in society these artists reformulated art and the text and opened up new possibilities in communication and for the rehabilitation of society during a period of great turmoil and change.

TO FOLLOW THE WORK IN SEQUENTIAL ORDER, TURN TO THE RIGHT AT THE FRONT DESK.

EXPLANATORY LABELS ARE PROVIDED FOR A MAJORITY OF THE WORK.

The Avant-Garde and the Text