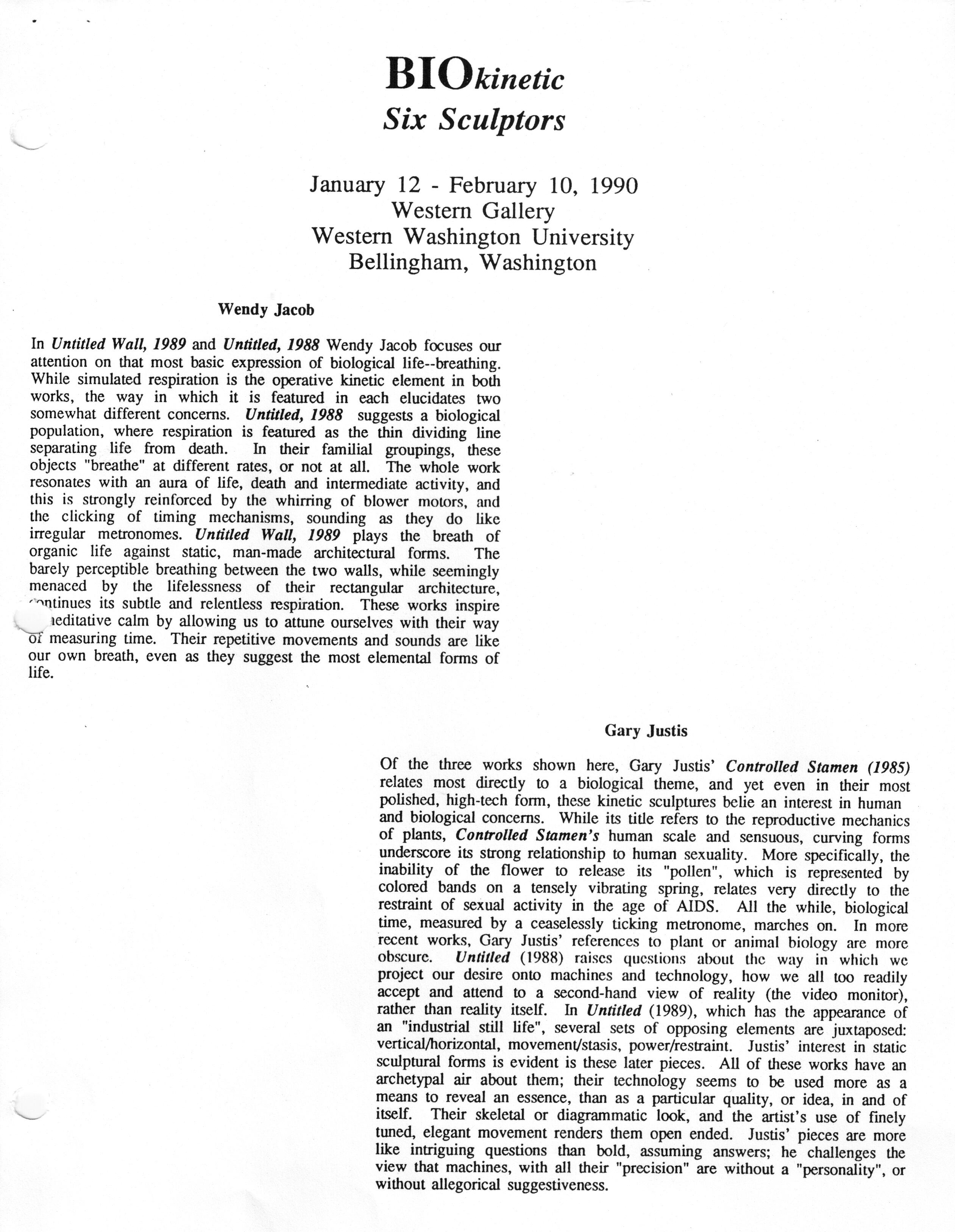 All of the artists in BIOkinetic use movement together with allusions to nature; their works lead to a variety of possible interpretations, but a common conclusion is discovered in statements about our mistreatment and misunderstanding of the world around us. These statements; range from the pointed (Tom Skomski) to the extremely subtle (Wendy Jacob) to the quirky and personal (John Ploof). Unlike much kinetic art of the early and mid 1900's, the work in BIOkinetic is rarely machine-like, but more often lowtech, unpredictable and seemingly alive. These works encourage us to abandon preconceptions about what is "art" and what is not; they reward us most when we see and feel them in their own time, and for their own qualities and presences.

In Untitled Wall, 1989 and Untitled, 1988 Wendy Jacob focuses our attention on that most basic expression of biological life--breathing. While simulated respiration is the operative kinetic element in both works, the way in which it is featured in each elucidates two somewhat different concerns. Untitled, 1988 suggests a biological population, where respiration is featured as the thin dividing line separating life from death. In their familial groupings, these objects "breathe" at different rates, or not at all. The whole work resonates with an aura of life, death and intermediate activity, and this is strongly reinforced by the whirring of blower motors, and the clicking of timing mechanisms, sounding as they do like irregular metronomes. Untitled Wall, 1989 plays the breath of organic life against static, man-made architectural forms. The barely perceptible breathing between the two walls, while seemingly menaced by the lifelessness of their rectangular architecture, continues its subtle and relentless respiration. These works inspire meditative calm by allowing us to attune ourselves with their way of measuring time. Their repetitive movements and sounds are like our own breath, even as they suggest the most elemental forms of life.

Of the three works shown here, Gary Justis' Controlled Stamen (1985) relates most directly to a biological theme, and yet even in their most polished, high-tech form, these kinetic sculptures belie an interest in human and biological concerns. While its title refers to the reproductive mechanics of plants, Controlled Stamen's human scale and sensuous, curving forms underscore its strong relationship to human sexuality. More specifically, the inability of the flower to release its "pollen", which is represented by colored bands on a tensely vibrating spring, relates very directly to the restraint of sexual activity in the age of AIDS. All the while, biological time, measured by a ceaselessly ticking metronome, marches on. In more recent works, Gary Justis' references to plant or animal biology are more obscure. Untitled (1988) raises questions about the way in which we project our desire onto machines and technology, how we all too readily accept and attend to a second-hand view of reality (the video monitor), rather than reality itself. In Untitled (1989), which has the appearance of an "industrial still life", several sets of opposing elements are juxtaposed: vertical/horizontal, movement/stasis, power/restraint. Justis' interest in static sculptural forms is evident in these later pieces. All of these works have an archetypal air about them; their technology seems to be used more as a means to reveal an essence, than as a particular quality, or idea, in and of itself. Their skeletal or diagrammatic look, and the artist's use of finely tuned, elegant movement renders them open ended. Justis' pieces are more like intriguing questions than bold, assuming answers; he challenges the view that machines, with all their "precision" are without a "personality", or without allegorical suggestiveness.

In Michael Palm's work the outside is brought in; what is all too easily ignored in the larger environment "out there", is featured and focused upon within the clean, uncluttered space of the gallery. The details and intricate workings of natural systems (in this case, the way the water and gravity work on and influence earth) have always been of great interest to artists, not only for the great beauty that the simplest details of nature present, but for the corollaries that artists in all disciplines have always discerned between nature's activity and our own. Nature's Detail is part visual display, part "scientific" experiment, and partly a result of this artist's childlike curiosity and fascination with the subtle gestures of the environment. The beauty of Paha's "experiment" is in its simplicity: as ice melts at the top left. gravity feeds water through a series of house shaped chambers, where the visual and material qualities of the substances within (fine sand, coarse sand, gravel, dirt) are slowly transformed. The interaction of these elements is also demonstrated by the transition from solid to ice to liquid water, which becomes slightly stained--a record of its journey. Allowed to rest in the bottommost chamber, the water gently deposits its silt. The kinetic aspect of this work, like many in BIOkinetic, is extremely subtle; it is a movement which must be felt as much as seen. An antidote to raucous human activity, Nature's Detail allows us to contemplate a timeless and elegant gesture of our environment, from which we obviously have much to learn.

With a Master's degree in microbiology and a Master of Fine Arts degree, John Pakosta's background epitomizes the interrelationship between art and science that has traditionally resulted in great works of kinetic art. At the same time, his works are based not on obscure and inaccessible scientific theory, but on simple and elegant principles. 100 Lemon Cell is a "battery" powered by the citric acid of lemons: each fruit is pierced with two rods, one zinc and the other copper, which draw out and indicate (by means of a simple electrometer) their inherent energy. Field Drawing is equally rich in its artistic and its scientific interpretations: It is at once a color field and also a gridded test tube-studded field of energy. While we are never sure of the importance of a scientific versus an aesthetic reading of Pakosta's works, that seems to be very much the point: that art and science draw on the same inspiration, but are different only in the nature of their expression. The kinetic aspects of both 100 Lemon Cell and Field Drawing are extremely subtle. The electrical charge given off by the lemons will lessen as their acid converts to sugar, the brilliant flowers will fade in their test tube cases. Pakosta thus establishes a correspondence between the changes we can see and those we normally do not perceive. Five Wedges is similar to a greatly enlarged cell that has undergone mitosis. Each "nucleus" is the center of a different kinetic function, while it remains clear that all five have a common point of origin. The most allegorical of Pakosta's works here is Intuition. As the work is inflated with rushes of air and the grid of gold flaps flutter upward, it mimics the Eureka! response we get when happening upon some unexpected insight. Unlike the actual human brain, Pakosta's model receives little input from outside itself, which again is very much the way intuition happens, as golden bits of information rise up to form some new and unforeseen thought-form.

John Ploof's works operate both as individual kinetic pieces and collectively as a homelike, yet austere environment. A human presence is evidenced by its absence: where are the people who wear these clothes, who sit in these chairs, who operate these everyday machines? The found objects and the "found energy" that sets them in motion have a decidedly low-tech, even sentimental or nostalgic quality. Their movements are slow and repetitious, like a heartbeat or breathing; more allusions to the absent humans who exist through these quirky accumulations. In response to the inherent visual and mimetic qualities of these objects, we are invited to imagine a host of possible relationships, personalities and situations. The constantly tinkering bell becomes a simulation of speech which is powered by a record player. The revolving candle, whose light passes predictably over table, floor, chair and shoes seems almost agonizingly habitual. A pair of pants, continually "wetting themselves", is like a nagging, uncomfortable memory. These works intrigue simply and masterfully; they convince us to behold them in their time.

The title of Tom Skomski's piece refers dually to the distillation of water, which happens whenever it sits at rest, and to the group of Dutch artists known as de Stijl (the Style), of which Piet Mondrian, Antoine Pevsner, and Georges vanTongerloo were members in the first two decades of this century. The work of these influential artists, like Skomski's, was based in part on modular systems, and on the relationship of such systems to man and nature. Skomski's bottles can be equated with "bodies" in a communal setting, an analogy which is supported by the fact that over 70% of the human body is composed of water. This work is both a rare and beautiful visual display which changes subtly as we move around it, and a socially concerned work, ac; it focuses our attention on the quality, or lack of quality, of one of life's basic requirements. The element of lead pipe, which carries water to all of us, is seen both as a way of distributing this necessity, and as a threat to our safety. The irony here is that in our efforts to control nature and to survive, we often threaten our survival. The pipe is also used as a way to organize the work of art, and as an element whose hard, dense characteristics stand in sharp contrast to the fragile and light refracting qualities of the glass-bottled water.